Luminus are illuminants that act as a sort of pet. They are created when the waves of a constellation combine with Harth's mana. While they don't appear to be sentient, they can be absorbed into the body of whoever obtains them. Once you've absorbed a Luminus, you can then summon it to activate its unique powers. Luminus will boost the stats of their summoner and aid them in battle.

Onto the more technical stuff! There are at least 11 Constellations of which we know. Along with the constellation, Luminus can obtain the traits of one of the 6 Rune Attributes which can assist the player by adding points to their Rune Attributes tree. The color of the Luminus determines which Rune Attributes are getting additional points.
They have varying grades which equate to their strength of the unique powers they can grant the summoner. We usually rank their strengths from Grade 1 to Grade 5. The higher the grade, the higher the values and stats.

During the fusion process, there is also a certain chance for Luminus to become "Blessed". This will increase the Luminus' powers a little more than your average Luminus at the same grade.
If you use Luminus that is the same grade as your Luminus, it will give you a 50% chance to succeed, and it lowers by half with each grade lower than your Luminus. Check the table below for easier understanding! 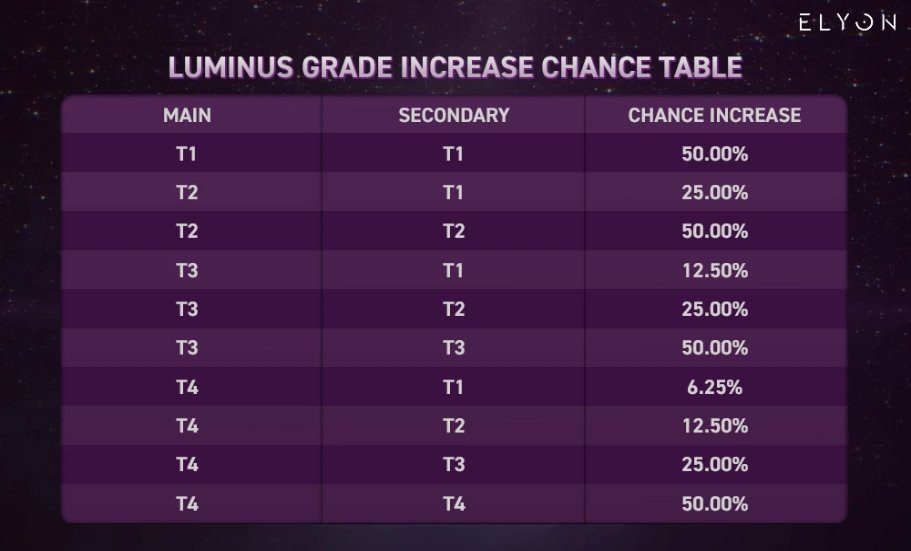 Below we have added a table of all the Luminus currently available and the additional stats they provide.